War on the Horizon: Advertisers vs. Ad Blockers. What do you think of when you hear words like ‘nuclear’, ‘military grade’ and ‘rules of engagement’?

These were some of the words used by Roi Carthy, CMO of Shine Technologies, to describe the current climate between advertisers, users and companies like Shine. Mr Carthy, whose company is partly responsible for blocking $22b worth of advertisements last year, intended to send a message while on stage with top Google and Yahoo executives Benjamin Faes and Nick Hugh.

On February 23rd, Carthy stated: “Shine is the single biggest threat in the history of advertising…it’s a stellar opportunity to reset the relationship with consumers”.

Mr Carthy went on to say that consumers were at the risk of being “abused” by current advertising technology. 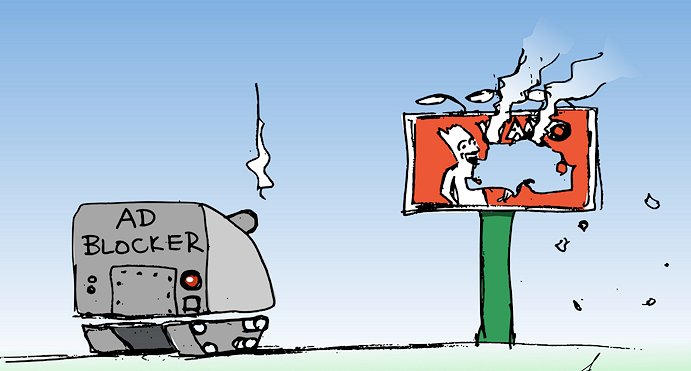 Obviously, MDs of media and platforms at Google, Benjamin Faes did not agree. He described such software as a ‘blunt’ solution that results in punishing both the user and good advertisers.

“Blocking all ads I think it’s diminishing my experience of advertising and in that case, we see an issue for the user themselves. More and more publishers just can’t afford to give their content for free…a user with an ad-blocker will keep running on websites who ask the user to pay for content then they unblock the ad-blocker and then see all bad ads anyway,” Faes said. “I just don’t want to ruin that ecosystem…I’m really concerned by this black-and-white think,” the Google executive added.

Nick Hugh, vice-president and general manager of advertising for EMEA at Yahoo, waded in as well: “You’re blocking at a network level, but actually at a publisher or property level some (ads) are very good and if you block everyone you completely destroy the value exchange and the ecosystem”.

This is when Roi reiterated his stance that current advertising technology is using “military grade” levels of tracking on users in order to profile them into consumer segments, adding that the rise of his software was a “clear signal” that the current “terms of engagement” needed to be rewritten.

Clearly, Roi is not alone in his thinking as big companies continue to back ad-blocking technology. As of last year, Apple lent their support to ad-blocking technology by supporting multiple ad-blocking applications. The massive European mobile carrier Three has also announced its plan to integrate ad-blocking into their network later this year. Gaining traction this size has clearly shaken even the giants of the advertising world.

While neither side came to an amicable conclusion on stage at the MWC, both Faes and Hugh did highlight what each company is doing to help combat the rise of ad-blocking technology. Specifically, the ‘accelerated mobile pages’ feature that allows for faster loading times on mobile devices - “(It) challenges the ad to be as quick as the content, that’s the type of thing that really resets the contract we have between publishers and users,” Faes said.

The Advertising Counter-Attack: Blocking the Ad-Blockers

Some sites who rely heavily on advertising as a source of income have already taken the initiative to make the first move in this war. Their move? Simple - block the ad blockers. If a popular content site like forbes.com or wired.com detects ad-blocking software on a user’s browser, they a receive a message like this: Of course, users will be able to view the site once they turn off their ad-blocker or pay to subscribe to an advert-free version of the site. This primer of protection from ad-blockers is recommended to be displayed in a certain format in order to communicate effectively with users using ad-blocking software. As of March 7th, the Interactive Advertising Bureau (IAB) suggests to use a DEAL format:

This format of communication was suggested alongside the IAB’s development of an ad-blocking detection script available for all IAB members to help advertisers ‘engage’ with those using ad-blocking software. “The release of this primer in conjunction with the open-source ad blocking detection script will open the door for transparency and meaningful dialogue with visitors using ad blockers,” said Scott Cunningham, Senior Vice President, Technology and Ad Operations at IAB. He continued: “We believe that a combination of tools and the DEAL approach to communication with consumers will allow publishers big and small the chance to cut through the blockade, ensuring the strength of the open, ad-supported internet.”

Confused? Don’t be. Just guess what the response of the ad-blocking community was to those sites who block those who use the ad-blocking software? Yep. They blocked them.

In what appears to be the beginning of a never-ending roundabout of blocking, the ad-blocking community responded the only way they know how - by creating the Anti-Adblock Killer. Well, technically, this time, the software is simply ‘tricking’ a site into believing an ad-blocking user is a normal user, but the concept remains the same. However, it still remains to be seen if advertisers will respond with a detector for those who block their ad-blocking primers…

In many ways, Roi McCarthy was correct when he likened this situation between advertisers and ad-blockers as a war - shots are being fired on each front. As Simon Fox, chief executive of the Daily Mirror publisher, Trinity Mirror, has stated on March 8th: “It is also becoming a war of technology. As we come up with ways to detect ad blocking software they come up with another way (to block ads). It is a war, you have to be constantly updating.”

It is unsure if the ‘blow-for-blow’ (or ‘block-for-block’) never ending merry-go-round will continue or meaningful dialog will ensue to ensure both sides come to an agreeable solution. Clearly, if the giants of the advertising world such as Google and Yahoo are worried then perhaps it is best to find new and amicable ‘rules of engagement’ before this technological game of cat and mouse starts to get messy…